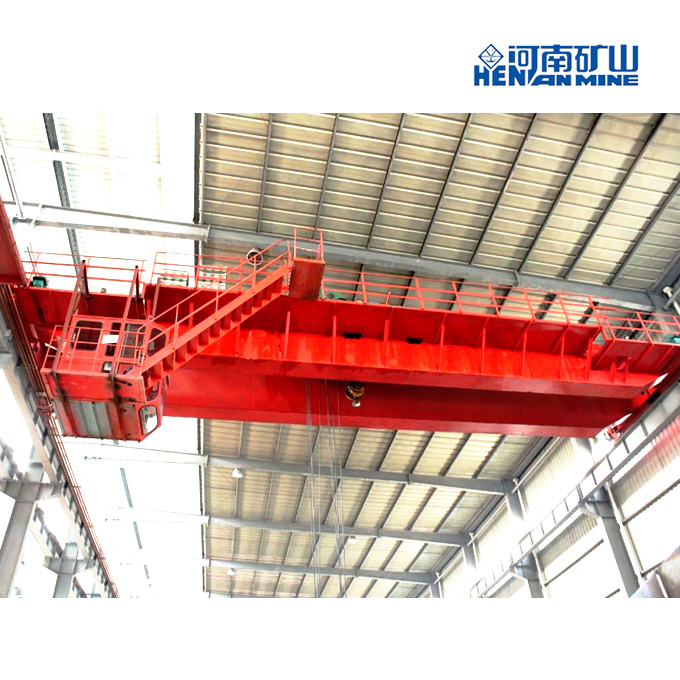 Get a Quote Email to us

QD electric doubie-girder bridge crane with hook is the widely used hoisting machinery currently.It is mainly comprised of box-shap bridge,crane crab,trolley travelling mechanism and electric control system.The load handing device is the hook.On the girder laid rails for crane crab to transversely move.The girder is weld with the box-shaped end girder.At the middle of the end girder are joints which are fastened with bolts for fragmented transportation of bridges.The platform is used to place trolley travelling mechanism,electric equipment and used for repair.

1. Main beam – The main traveling structure of the crane which spans the width of the bay and travels in a direction parallel to the runway. The bridge consists of two end trucks and one or two bridge girders depending on the equipment type. The bridge also supports the trolley and hoisting mechanism for up and down lifting of load.

2. End trucks – Located on either side of the bridge, the end trucks house the wheels on which the entire crane travels. It is an assembly consisting of structural members, wheels, bearings, axles, etc., which supports the bridge girder(s) or the trolley cross member(s).

3. Bridge Girder(s) – The principal horizontal beam of the crane bridge which supports the trolley and is supported by the end trucks.

4. Runway – The rails, beams, brackets and framework on which the crane operates.

5. Runway Rail – The rail supported by the runway beams on which the crane travels.

6. Hoist – The hoist mechanism is a unit consisting of a motor drive, coupling, brakes, gearing, drum, ropes, and load block designed to raise, hold and lower the maximum rated load. Hoist mechanism is mounted to the trolley.

7. Trolley – The unit carrying the hoisting mechanism which travels on the bridge rails in a direction at right angles to the crane runway. Trolley frame is the basic structure of the trolley on which are mounted the hoisting and traversing mechanisms.

8. Bumper (Buffer) – An energy absorbing device for reducing impact when a moving crane or trolley reaches the end of its permitted travel, or when two moving cranes or trolleys come into contact. This device may be attached to the bridge, trolley or runway stop.

1. Hoist and electric parts will be packed by plywood crate, for avoiding the demage from goods crash and impact during the delivery.

2. Girders and other main parts will be packed by plastic woven cloth, for preventing rust from soppy condition during the transportation.

3. Only the best transport solution will be taken for saving your cost uttermost on finance, security and time.

We are China Qd Type Electric Traveling Industrial Heavy Duty Overhead Crane manufacture and supplier,You can get more details with Email,you will get cheap price or factory price.

FAST AND RELIABLE SERVICE FOR YOUR PROJECT